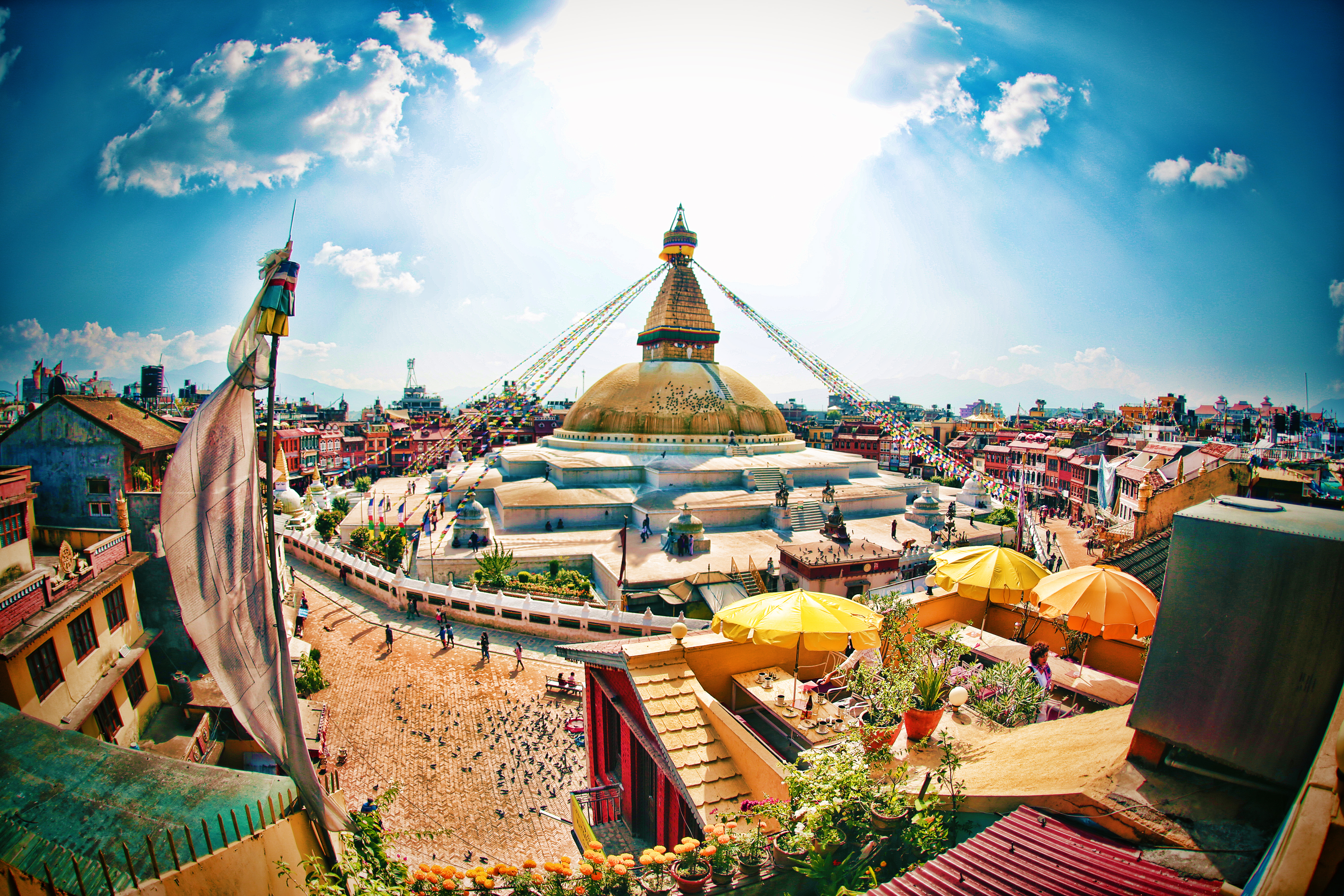 Bhaktapur Durbar Square is a conglomeration of pagoda and shikhara style temples grouped around a fifty-five window palace of brick and wood. The square is one of the most charming architectural showpieces of the Valley as it highlights the ancient arts of Nepal . The golden effigies of kings perched on the top of stone monoliths, the guardian deities looking out from their sanctuaries, the wood carvings in every place-struts, lintels, uprights, tympanums, gateways and windows, all seem to form a well orchestrated symphony. The main items of interest in the Durbar Square are:

Boudhanath is among the largest stupas in South Asia, and it has become the focal point of Tibetan Buddhism in Nepal. The white mound looms thirty six meters overhead. The stupa is located on the ancient trade route to Tibet , and Tibetan merchants rested and offered prayers here for many centuries. When refugees entered Nepal from Tibet in the 1950s, many of them decided to live around Boudddhanath. They established many gompas, and the "Little Tibet" of Nepal was born. This "Little Tibet" is still the best place in the Valley to observe Tibetan lifestyle. Monks walk about in maroon robes. Tibetans walk with prayer wheels in their hands, and the rituals of prostration are presented to the Buddha as worshippers circumambulate the stupa on their hands and knees, bowing down to their lord. Many people believe that Bouddhanath was constructed in the fifth century, but definite proof is lacking. The stupa is said to entomb the remains of a Kasyap sage who is venerable both to Buddhists and Hindus. One legend has it that a woman requested a Valley king for the donation of ground required to build a stupa. She said she needed land covered by one buffalo's skin and her wish was granted by the King. She cut a buffalo skin into thin strips and circled off a fairly large clearing. The king had no choice but to give her the land.

Narayan, or Vishnu, is the preserver of creation to Hindus. His temple near Changu village is often described as the most ancient temple in the Kathmandu Valley . A fifth century stone inscription, the oldest to be discovered in Nepal , is located in the temple compound and it tells of the victorious King Mandev. The temple now covers sixteen hundred years of Nepalese art history. The temple, built around the third century, is decorated by some of the best samples of stone, wood, and metal craft in the Valley. In the words of one tourist guide, "When you look upon Changu Narayan, you observe the complete cultural development of the Valley."

Nepal 's first and most famous national park is situated in the Chitwan Doon or the lowlands of the Inner Terai. Covering an area of 932 sq km. the park includes hilly areas of the Siwalik Range covered by deciduous sal forest. A fifth of the park is made up of the floodplains of the Narayani, Rapti, and the Reu Rivers and is covered by dense tall elephant grass interspersed with riverine forests of silk cotton (kapok), acacia and sisam trees. This ecologically diverse area is the last remaining home in Nepal for more than 300 of the endangered Asian one-horned rhinoceros and harbours one of the largest populations of the elusive and rare Royal Bengal tiger. Besides rhino and tiger, Chitwan also supports a great variety of flora and fauna. There are four species of deer, including the spotted chittal, leopard, sloth bear, wild boar, rhesus monkey, grey langur monkey, wild dog, small wild cats, the white stockinged gaur (the world's largest wild cattle) and many other smaller animals.

The Kathmandu Durbar Square holds the palaces of the Malla and Shah kings who ruled over the city. Along with these palaces, the square also surrounds quadrangles revealing courtyards and temples. The square is presently known as Hanuman Dhoka, a name derived from the statue of Hanuman, the monkey devotee of Lord Ram, near the entrance of the palace.

Pashupatinath is the holiest Hindu pilgrimage destination in Nepal . There are linga images of Shiva along with statues, shrines, and temples dedicated to other deities in the complex. A temple dedicated to Shiva existed at this site in AD 879. However, the present temple was built by King Bhupatindra Malla in 1697. A gold plated roof, silver doors, and woodcarvings of the finest quality decorate the pagoda construction. Guheswari Temple , restored in AD 1653, represents the female "force". It is dedicated to Satidevi, Shiva's first wife, who gave up her life in the flames of her father's fire ritual.

Unique among natural heritage sites world-wide is the Sagarmatha National Park, which includes Mt. Everest (8,848 m) and other high peaks such as Lhotse Shar, Cho Oyu, Ama Dablam, Pumori, Kangtega, Gyachung Kang, Tharnserku and Kwangde. Located North-East of Kathmandu, Sagarmatha National Park is 1,148 sq km. in area and consists of the upper catchment areas of the Dudh Koshi, Bhote Koshi and the Imja Khola rivers. Much of the park lies above 3,000m. Sagarmatha is rugged, with deep gorges, glaciers and unnegotiable ice and rock faces. Locally known as the 'Khumbu', it is the home of the famous Sherpa people. The Sherpas make a living by farming barley and potatoes and graze their yaks in high altitude pastures. Young Sherpas have also made their name in mountaineering and the trekking industry has of late become the community's economic mainstay. In 1979 the park was declared a World Heritage Site.

The history of the Valley, according to the legends, begins with Swayambhu, or the "the self-existent". In times uncharted by history, Bodhisattva Manjusri came across a beautiful lake during his travel. He saw a lotus that emitted brilliant light at the lake's center, so he cut a gorge in a southern hill and drained the waters to worship the lotus. Men settled on the bed of the lake and called it the Kathmandu Valley . From then on, the hilltop of the Self-existent Lord has been a holy place.